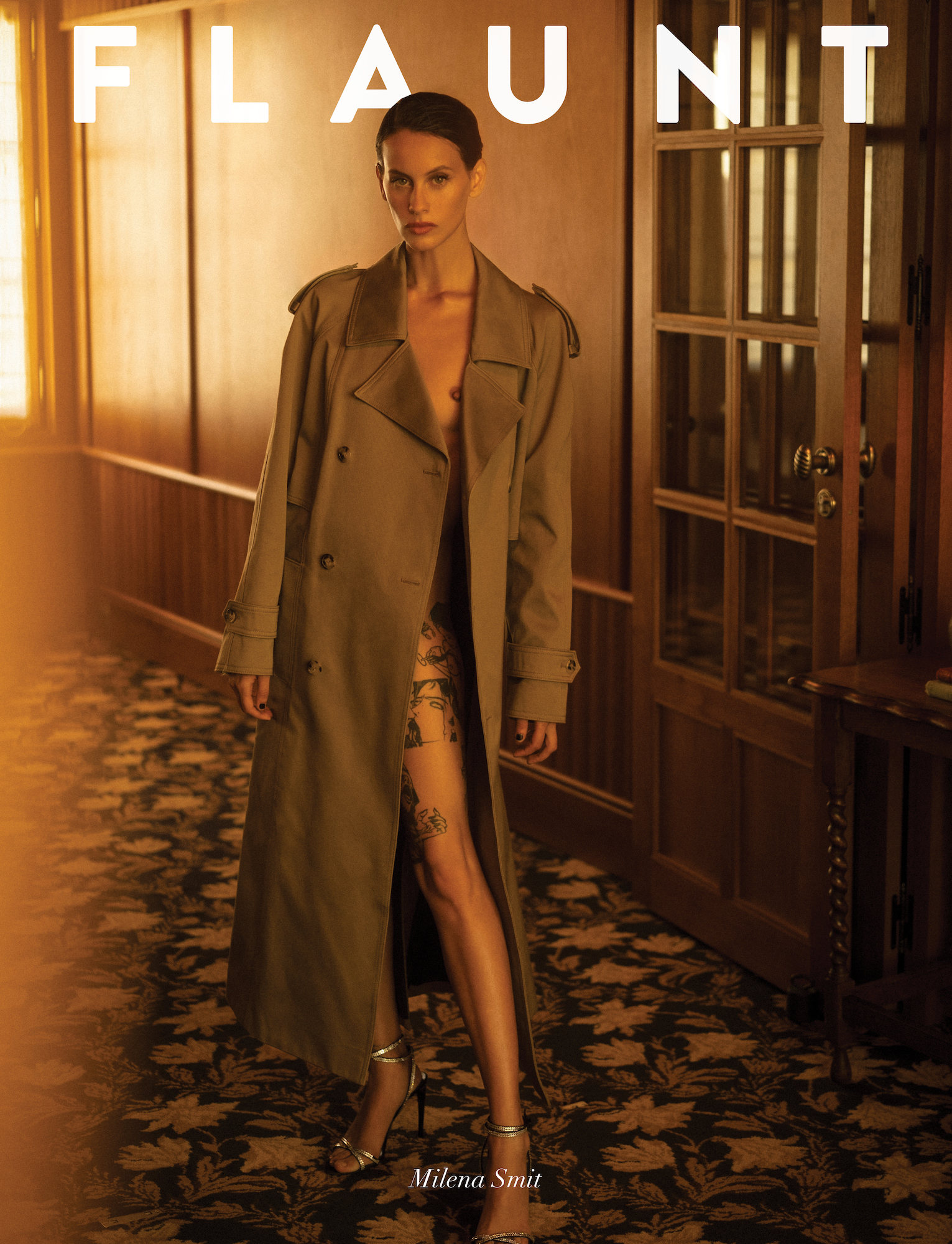 Call it destiny. Right place, right time. Good karma or good luck. For Milena Smit, she’s fine with whatever you want to call her unique fortune. The actor, who recently starred in Pedro Almodóvar’s critically-acclaimed Parallel Mothers, alongside Penélope Cruz, was working as a receptionist at a hotel in Murcia back in 2018 when she received an Instagram message asking her to audition for a role in a film. That film ended up being David Victori’s Cross The Line (No Matarás in its native Spanish), which garnered Smit her first Goya nomination.

The unexpected Instagram message forCross The Line did not come completely out of nowhere. The thriller, which follows the aftermath of an accident in which a good-natured man kills someone in the name of self-defense, was missing a protagonist with the look. Meanwhile, Smit was creating said look on her Instagram account, where she would post photos from shoots she was creating with fellow photographer friends in cemeteries and places of the sort—crafting the perfect Mila for Victori’s film, without even knowing it.

“Cross The Line was my first movie ever,” says Smit. “It was my first experience ever acting, as well. For a person who had never acted before to live all the filming process, with that intensity, and with an amazing director...it was magical. He made the whole time shooting an incredible experience, helping me navigate the character and easing me into the role through activities and interpretation exercises that we used to do before every shoot.” The filming of Cross The Line introduced Smit to her future. “I realized that that was my passion,” she explains of her dream job. “I had never before found what I wanted to do with my life, so I was just working different jobs, without a passion, but to survive. And it was then when I realized that acting was what I wanted to do.”

Following the wrapping of the film, Smit went into the acting world full force, doing a seminar at Cristina Rota, a recognized art school in Madrid, and then a masterclass with Bernard Hiller, the renowned acting coach to the likes of Jeff Goldblum and Cameron Diaz. “Having an experience with a more international coach was a discovery,” emphasizes Smit of her experience together with Hiller. “He has a viewpoint not only focused on acting exercises, but on how to be an actor. On the interests that an actor should have. Like how an actor should have worldwide knowledge, they should be cultured, they should be curious and active. Because you put all that knowledge into your characters. I loved doing that master class with him, and I still have a relationship with him, and I am sure I will be having more classes with him.”

Smit has not stopped working since Cross The Line premiered. In fact, while the film was premiering she received the information for another audition, one without the name of the project nor of the director. Spoiler alert: it was Parallel Mothers by the legendary Pedro Almodóvar. “I was very grateful to not know who the audition was for,”she explains, “because I went into the audition very calm, and they saw me with out any nerves.” She didn’t find out what the movie was until the final stage of auditions, when she would act in front of Almodóvar and Penélope Cruz. “And thank god the next audition was the final one with them, because if I had found out at the beginning what movie it was for, I don’t know if I would have done it so well.”

Parallel Mothers follows two single women—one middle-aged and established, one young and scared—who meet in a hospital room where they are both about to give birth. The two form a strong bond as they confront motherhood together. “Working with Pedro and Penélope was wonderful,” exclaims Smit. “We connected right away, and my relationship with the character was extremely organic. Rehearsals were also so beautiful. We were rehearsing for five months and then filming for three months, andI think those were the most beautiful months of my life.”

In an industry that moves so fast, having to create a project from scratch within mere months presented a challenge to the actor, especially a new one, to not feel over-whelmed. However, as Smit shares, “Everything was by, and for, the actors, and that isa very important thing for Pedro. When we would get onto set, everything was already ready so that we could have a few minutes to go over everything with Pedro before we started to shoot. And everyone respected the work of the actors, which is really hard, since there are so many departments working together, and so little time to make everything flow. So we were so grateful that Pedro gave it that importance, and gave every department enough time to do its job, so that we could have that little time before shooting.”

The film had its world premiere at the 78th Venice International Film Festival, and garnered Smit her second Goya nomination, this one for Best Supporting Actress, making it 2 for 2 in Goya nominations for her movies in her short, but very successful, career. From then on, Smit’s career ballooned, which saw her starting a new project as soon as the one before it wrapped. “You get to a point where you do not have time for anything,” she analyzes. “Not for yourself, or your family, or your health, or mental health, or to just check in and recognize yourself.” That is when she had to use the most important advice she received from both Almodóvar and Cruz: you have to learn when and how to stop. “That was the most important thing I have ever had to learn,” continues Smit.“And I have definitely noticed a difference, be-cause you start looking at projects in a different way, and you start living from a different perspective, without so much stress, and enjoying what you are doing so much more.”

With that advice in mind, she chose her next role very carefully: the character of Cata in the feature debut by Luc Knowles, Dragonflies.The film surrounds two friends who grew up in the outskirts of town, in a desolated neighbor-hood surrounded by mountains. They’ve spent their whole lives planning their escape in order to follow their dreams and forget their pasts.“Dragonflies was a really small movie that I believe we’ve made huge,” considers Smit. “It did not have a big budget or economical support, but the passion from all departments, and from the director, and all the actors, has made it so much bigger than it could ever be.”

The roles of Álex and Cata garnered Smit and her Dragonflies co-star, Olivia Baglivi, theBest Actress award at the Málaga Spanish FilmFestival. “She is my partner in crime,” comments the actor of her good friend. “She carries the weight in the movie, and I think we are a strong team. The chemistry we achieved in the movie is something that can be felt through the screen.” Of the film itself, she adds, “It has ended up being a movie with so much depth, with a beautiful message, amazing photography, and incredible acting. I really do believe we have received a final product that was so much more than we expected.”

Lastly, Smit took part in her first TV series,The Girl in the Mirror, which premiered on Netflix this past August. It follows Alma (Mireia Oriol), as she tries to regain her identity and piece together the events of a mysterious tragedy after losing her memory in a bizarre accident that killed most of her classmates. “I am extremely happy with how it turned out,” says Smit. “My character in The Girl in the Mirror is a small one, but gives a lot of information to the viewer, as well as to the main character, to achieve her goal. It was a pleasure to film it, since it was the first time I ever shot science-fiction. And it is definitely challenging, since you have no idea how it’s going to turn out.” Smit continues, “And what a privilege that we are betting on these types of shows. Especially in Spain because, in my opinion, this show is more related to an American show, and it makes me proud that we can say that in Spain we can also do shows like that.”

Now Smit is anxiously waiting for her upcoming projects to come to life. La Chica de Nieve, or Snow Girl, is a TV mini-series adaptation of the book by the same name by Javier Castillo. The story follows the disappearance of a three year-old in the middle of a crowd, leaving nothing behind but some strands of hair. Five years later, her parents receive a VHS tape of the little girl now at eight years-old. Smit plays the role of a journalism student that is drawn to the case, perhaps because there are some similarities between her life and that of the missing three year old. “In this series, I am truly the protagonist,” smiles the actor. “I am so excited to see it. But to be honest, I think this show was one of the hardest challenges I have had to face. Obviously all filming is hard, and you have to be responsible always, but it is true that in a series, being the protagonist who needs to carry the whole show is another level of hard work.”

Her latest upcoming project, Tin Y Tina, debuts in March 2023. Directed byRubin Stein and starring Jaime Lorente, the film is based on the French short, defined by critics as “a cult short film,” nominated for the Golden Méliès to the Best European Fantastic Short Film. “It is about a couple,” describes Smit,“who want to adopt children, and they go to a religious orphanage to look for them. The movie has a lot of religious symbolism, but it is a horror film.”

Not dissimilar to before her acting days, Smit’s Instagram showcases the actor playing with fashion in photographs from shoots with fellow photographer friends. Only now she is creating the perfect It Girl, being an ambassador for brands such as Cartier and Yves Saint Laurent. “Since I was little, I have been more interested in ‘anti-fashion,’” she laughs. “I have always preferred everything that went against what was ‘in’ in fashion. And it seems like now everything that I liked before is becoming trendy. Before I was always the ‘weird’ one for dressing like this and now it is what everyone wears. Now I feel more identified and at ease in the fashion world. And I am so content with my partnerships, I feel like they really represent me. They fit me like a glove.”

Smit’s life was turned upside down within a year thanks to an Instagram message. Now she is living the life she had never even dared to dream of. Her passion found her when she was least expecting it. Life works in funny ways, you never know what the calm and storms may yield, so make sure you are paying attention...and reading your DMs.

This is some text inside of a div block.