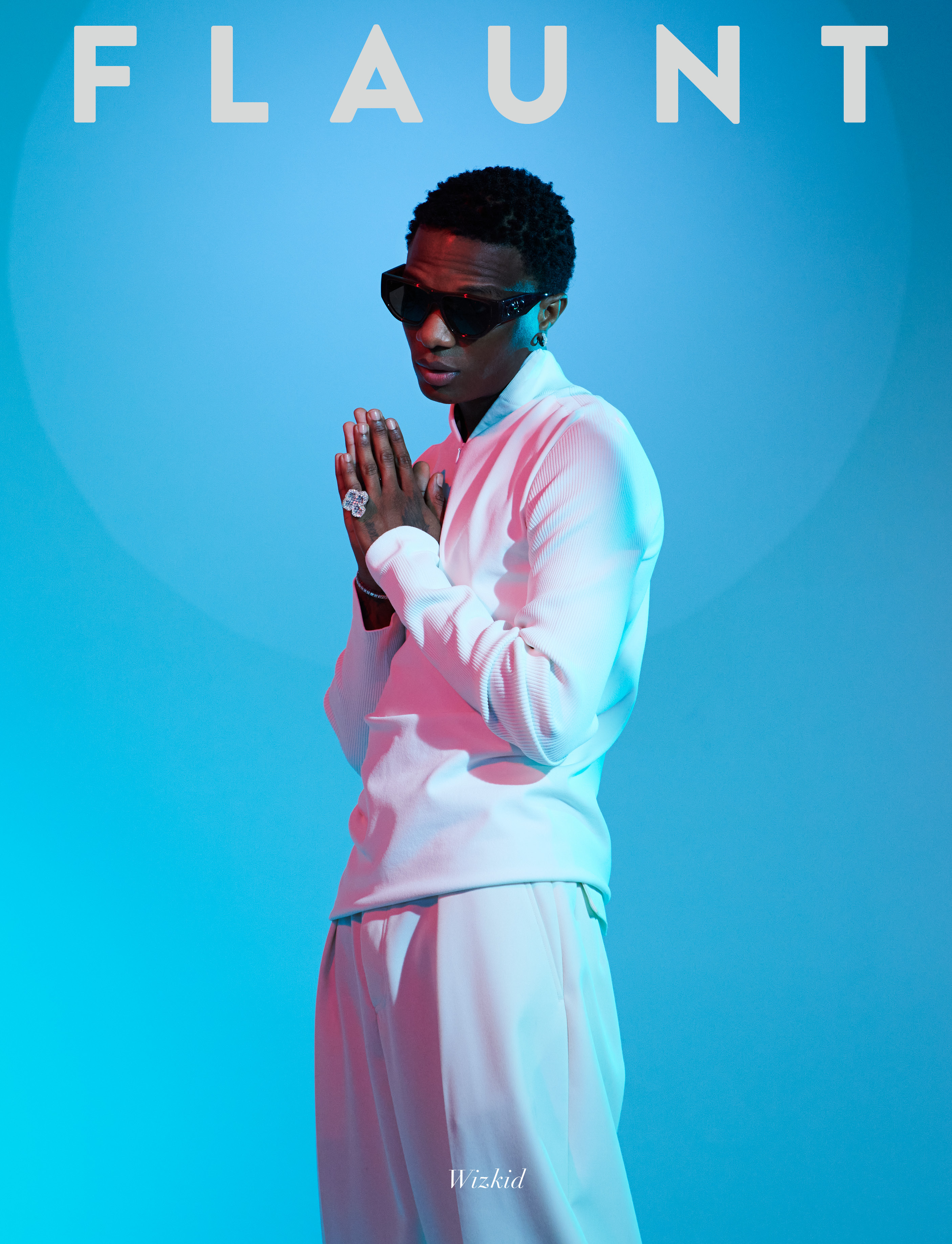 Be Warned: if you ever have the opportunity to interview Wizkid, it won’t be easy. The super-star is a moving target, attached to a calendar packed down to the nano second with studio time, tour dates, photoshoots, meetings, flights, and the like which constantly shifts and reshuffles. But I suppose that’s what happens when you’re one of the biggest stars on planet earth, and the biggest musical export to come out of Africa in the history of modern music. That’s also what happens when you’re hot on the heels of releasing one of the biggest global hits of recent years(the flowing “Essence” featuring Tems) after everyone from Beyoncé to Drake calls you up to collaborate (the former for the GRAMMY-winning The Lion King:The Gift track “Brown Skin Girl” and the latter for his equal-parts body and earth-shaking dancehall smash “One Dance”).

But while Wizkid may have gained a reputation as your favorite artist’s favorite collaborator, his success is all his own. He makes his rise from a child singer who’d perform with friends from church to an indisputable global icon look easy. It’s a towering musical stature that’s set to expand this fall thanks toMore Love Less Ego, his fifth studio album following 2020’s explosive Made inLagos (named after his beloved home city).

When it comes to the new stuff, the music sticks with his recurring son-ic themes: hummable and smooth dance floor jams built around ear-catching hooks that mix in Afro beat sounds with elements of pop and dance-hall. Because regardless of all of his triumph and aside from his hectic lifestyle, it’s the music that matters to him above everything. “The music keeps me going, honestly,” he says. “There isn’t anythingI love more than making music. I don’t think I’ll ever get tired of doing it. I’ve been doing this for years. Traveling the world, doing shows, shoots, appearances, everything. So, I’m used to it.”

‍You’re the first and only African artist to achieve a Gold album. What does a superlative like that mean to you?

It’s a blessing. It just shows you that we’re finally here. That’s the way I look at it, it’s not just me, it’s all of us. There are so many incredible musicians, artists, producers, engineers, instrumentalists fromAfrica. We have it all with world class talent and drive. There is going to be more music from Africa that’s going to make big waves around the world.

Let’s get right into the new music. You have the new album More Love Less Ego coming out. Tel lme about the genesis of that title.

I feel like the world just came back from a really unique time in our lives as people. Coming from that time, I feel we need more love in our communities. We need to just be good to one another and appreciate life more. So, this album title and even the music is just my own way of making people feel good.

I’m wondering how you deal with egos. Do you encounter a lot of it in the industry?

I’m trying to simply lead with good energy. I want more genuine interactions with the people in my life. Life already comes with its challenges, and with its ups and downs. I just want to be a real, positive energy towards myself and to my family, friends, and my fans.

‍‘Bad to Me’ from the new album starts off with a distorted guitar and then expands from there.When it comes to the new music in general, how do you go about constructing a song? Where do you start? With a beat, an idea, a rhythm, a line?

It really depends. Sometimes I go into the studio with an idea of the song ready, while other time sit’s just a melody. I get inspiration from beats, conversations I have, reflections on moments in my life, etc. I would say collaboration plays a big part of my process, which is why I’m particular about who I work with. I work with people that inspire me in different ways, from my producers to my engineers to fellow artists.

Speaking of, you’ve teamed up with powerhouses ranging from Beyoncé to Drake. What’s a common thread between two artists like those power-houses?

I would say good music. I don’t really look at external factors when it comes to making music. I base everything off the record, the connection, and the relationship. I only do it if it feels good and feels right.That’s the common factor there, the music was good and I felt a connection on the records.

‍“Essence” has been a global smash. How did you and Tems first meet? Can you talk about that collaboration? Did you have a feeling when you were recording it was going to blow up the way it did, or was it just one of many songs you worked on and released?

Tems and I connected through one of my boys I’ve known for a while. He actually manages her. But, I was already a fan of hers since she had a few songs that I really liked and few that were even popular before we made“Essence.” So, I would also say it’s ultimately the music that connected us. Every time I hear a new, young artist in Nigeria making good music or doing something fresh, it sort of reminds me of myself back when I first started. I know how important collaborations were back then for me at that stage of my career. Even now, I still enjoy collaborating. I’m always in sessions with other talent, both known and unknown. As long as the music is good and the connection is genuine, I’ll always collaborate with you.That’s exactly how it was with Tems when we made “Essence.” I think after we finished the song, I tweeted “Tems and I made magic.” That’s truthfully how I felt making the song with her. I knew the song was special. I’m glad people appreciate it.

How do you go about expanding your sound with-out repeating yourself? It’s a balancing act for any artist. I’m wondering how you grapple with it.I’m always making music, and in doing so I’m always trying new things and flexing my skills as an artist.

Every time I make an album, I always want to demonstrate growth in my artistry and as I get older, even with myself. I would say that helps, too: working on yourself, being real with yourself and those around you, and reflecting and appreciating your moments in life goes a long way in making my music and keeping it fresh.

I know you keep a sunny disposition and you credit your youth with your outlook, with your parents being Christian and Muslim. Can you tell me what exactly you learned from them?

I learned so much from my parents. Growing up was so incredible because of them. I learned the importance of believing in God, love for family, being humble, working hard, etc. I appreciate them for that and so much more. Even in my adult life now, I appreciate them even more. I’m glad I’m in a position to repay them in my own little way. And even at that, they’re still supporting me with their love and presence as my parents, and grandparents to my sons.

When it comes to your family, you have seven sisters. How do you think that has influenced your relationship with women in general?

That definitely set the foundation for my relation-ship with women. I understand the importance and value of a woman because I experienced it from the very beginning at home. My sisters were always around, looking after me, and showing me love.

Where do you go from here? Is there anything you want to accomplish that you haven’t?

More music. I don’t know if I’ll ever stop doing that. That’s what I love most. Career-wise, let’s see where else the music takes me. I really like clothes and fashion, so I’ll definitely be doing something big in that regard, just exploring my options and interests at the moment when it comes to that. There are some personal things that I’d like to accomplish for myself, at home, and with the family too.

This is some text inside of a div block.