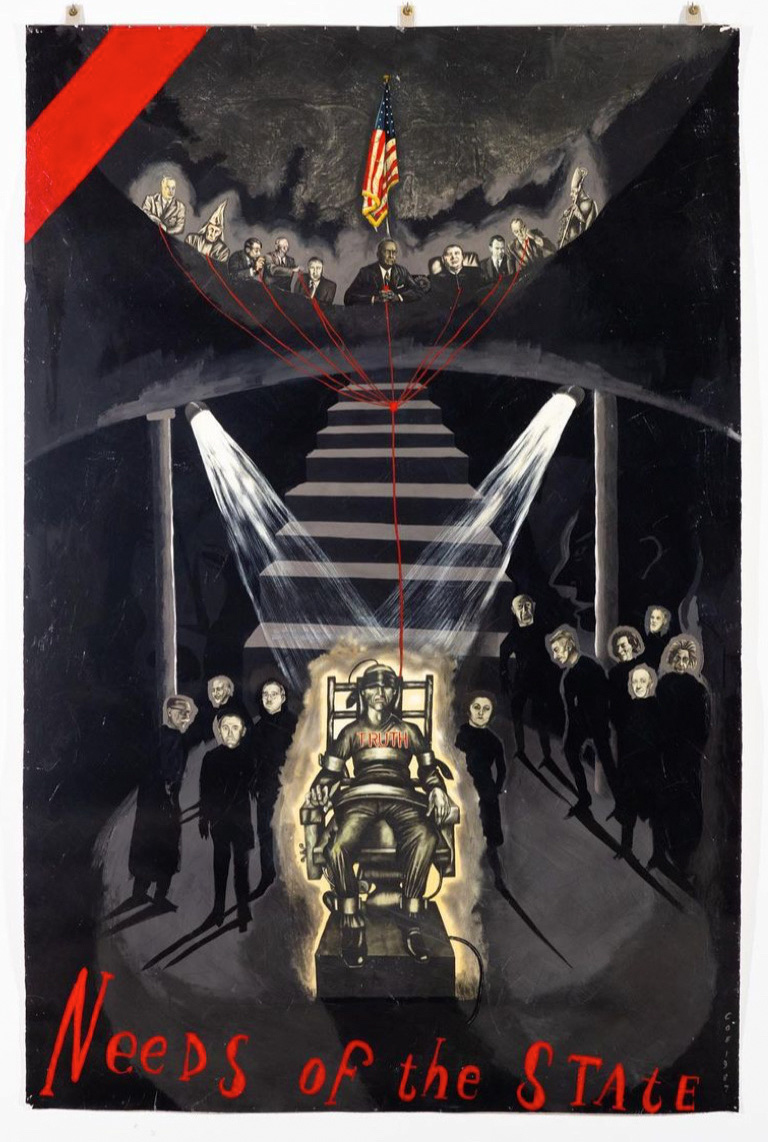 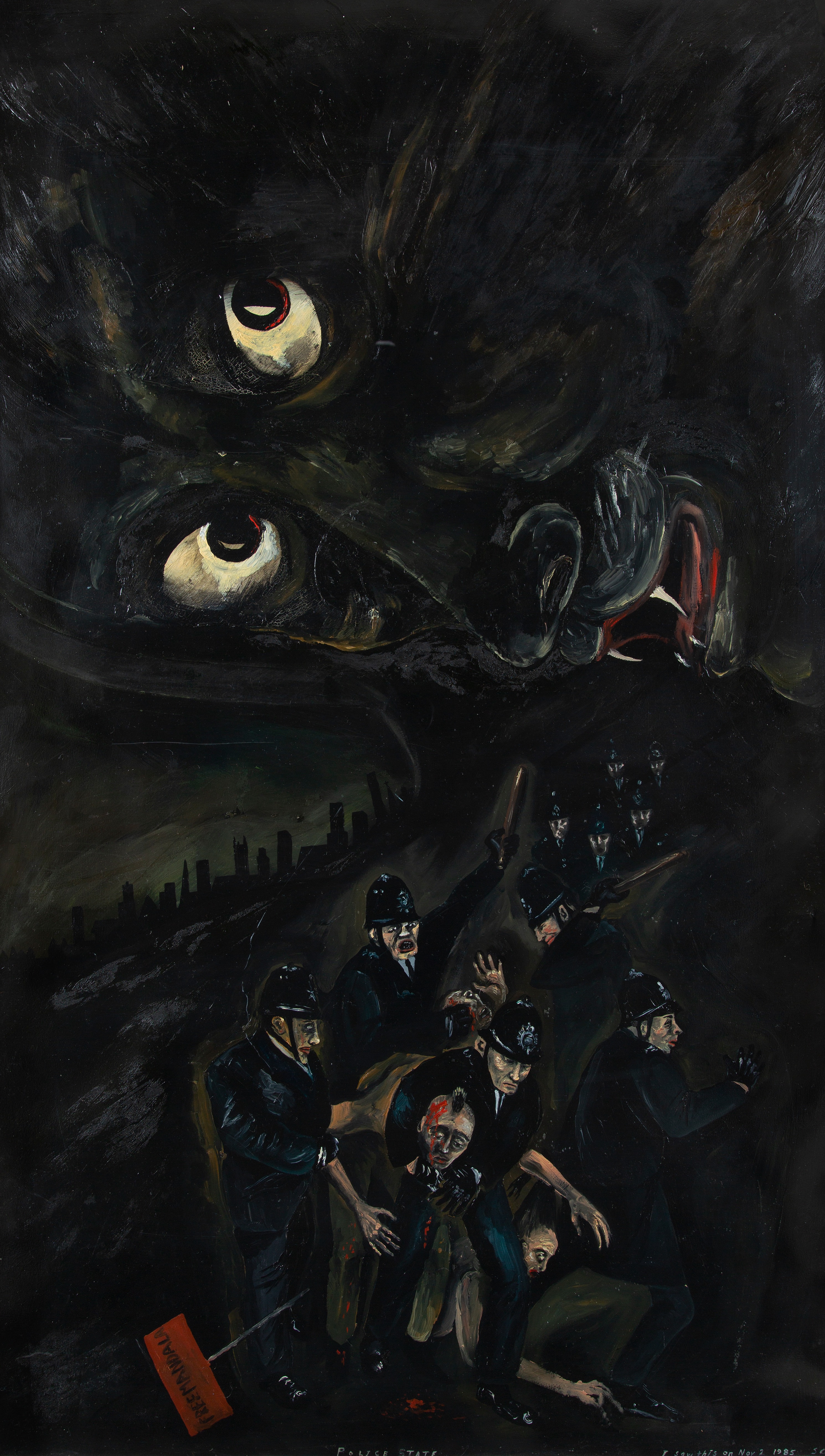 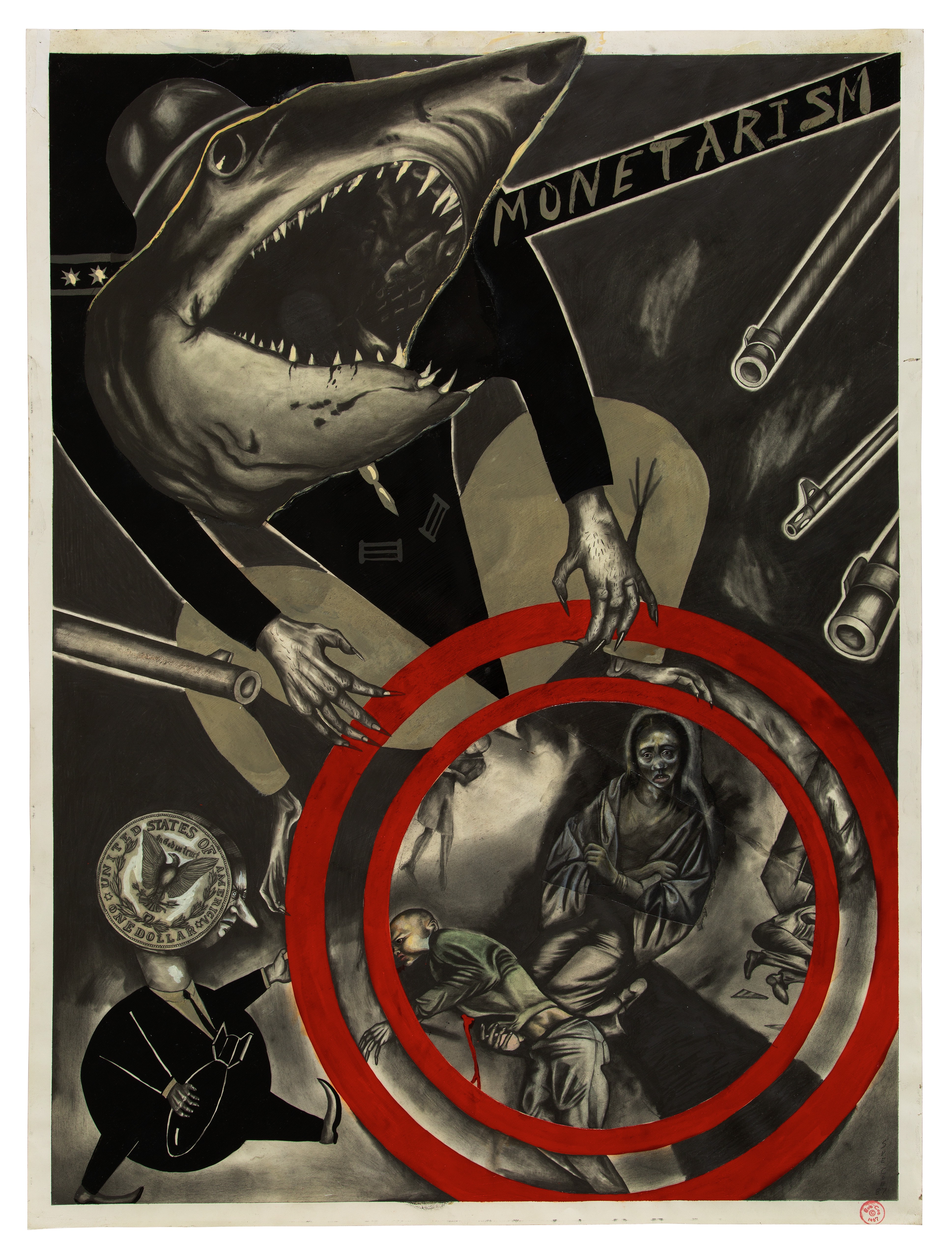 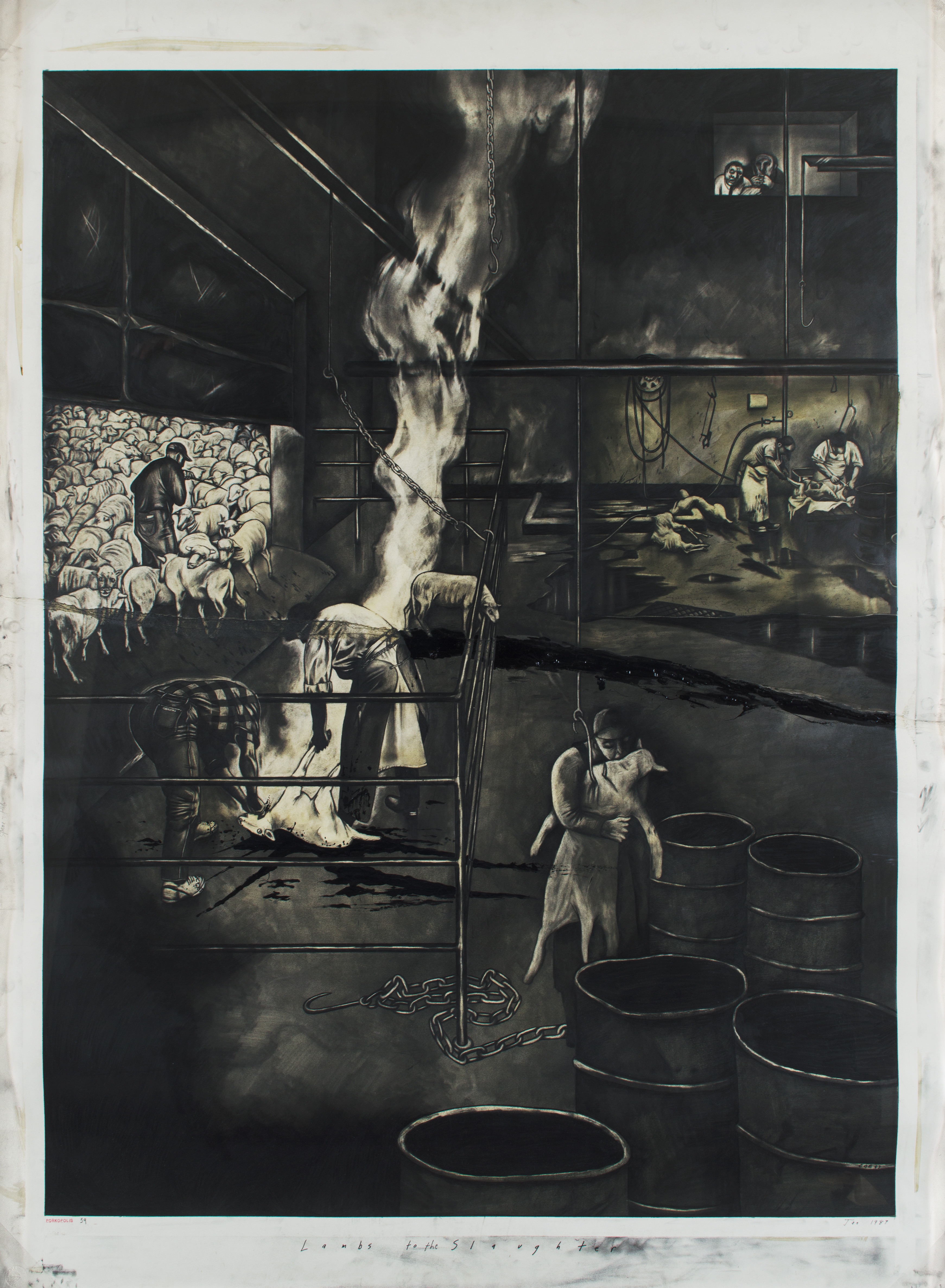 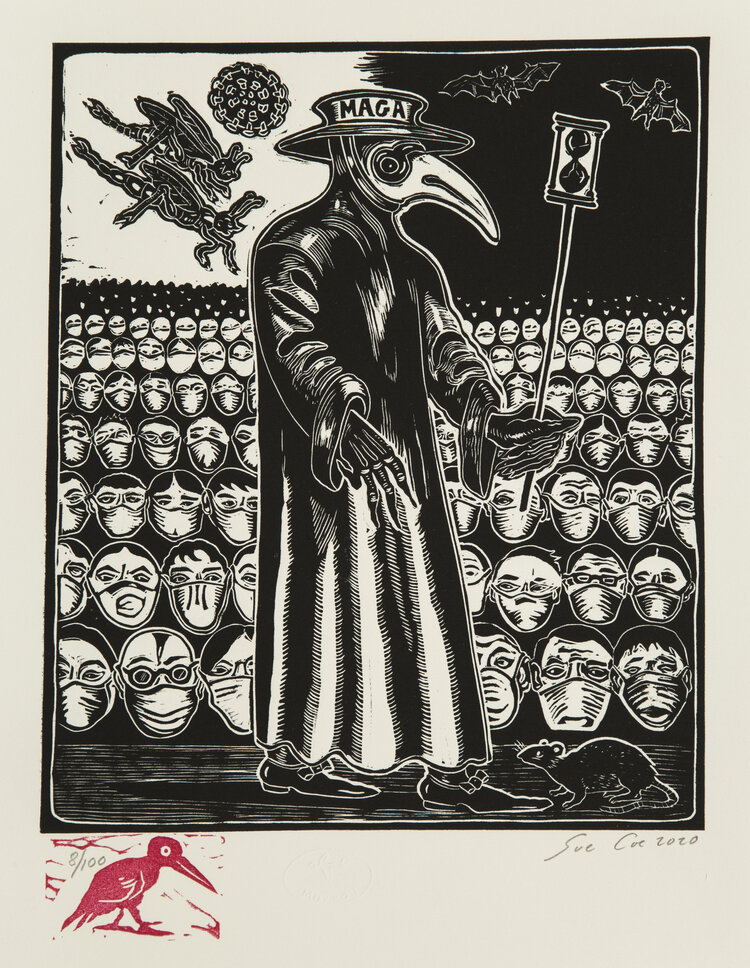 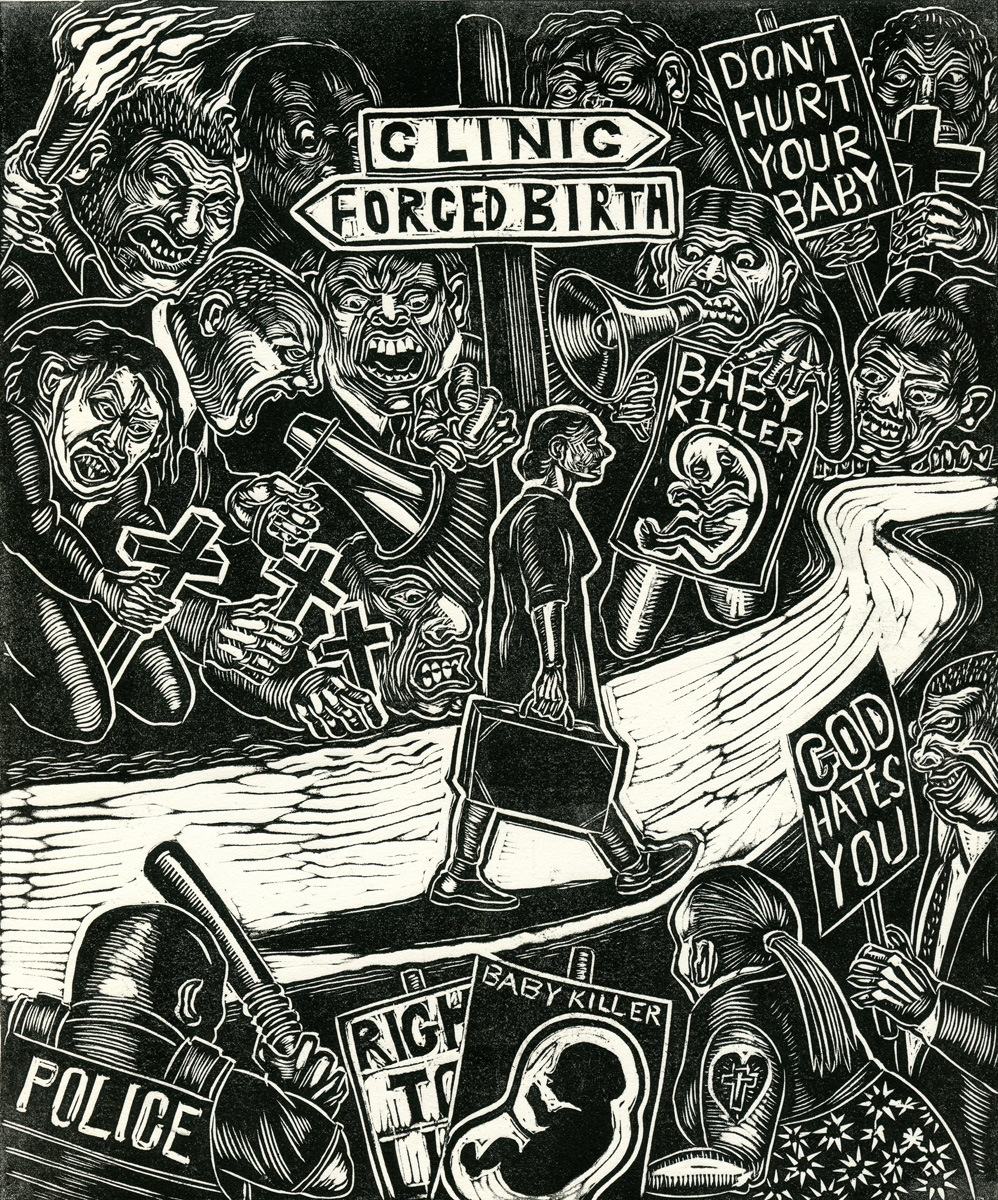 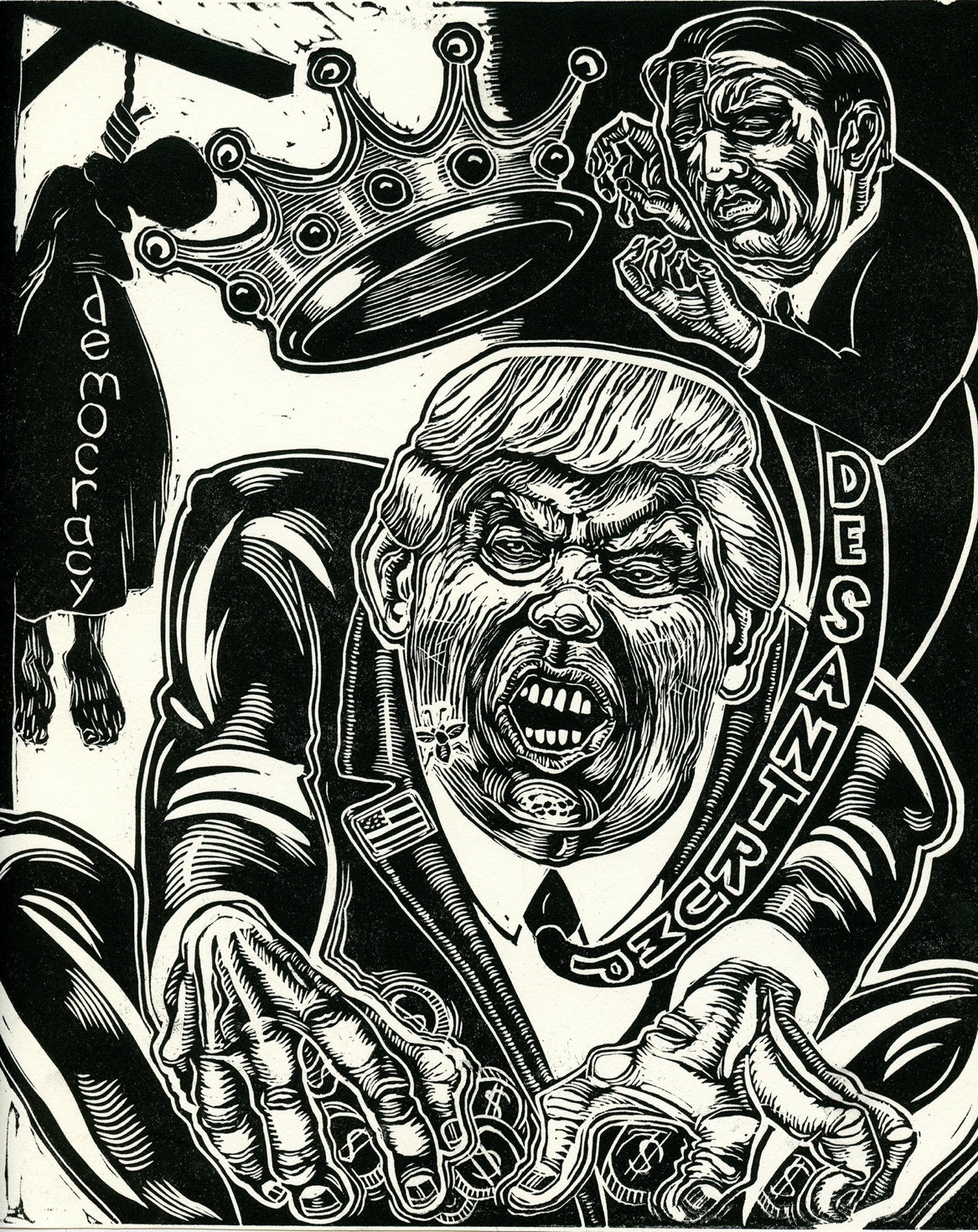 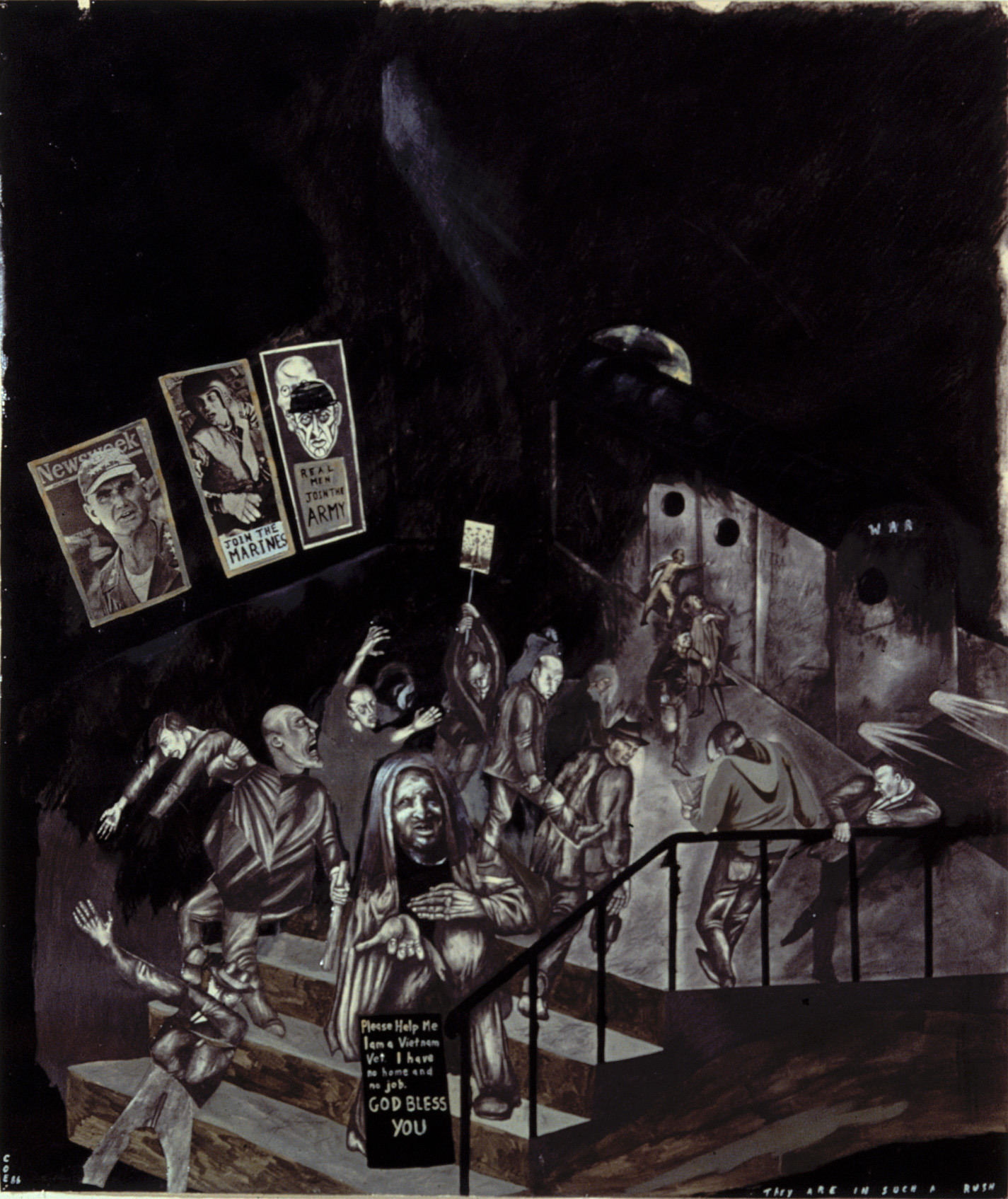 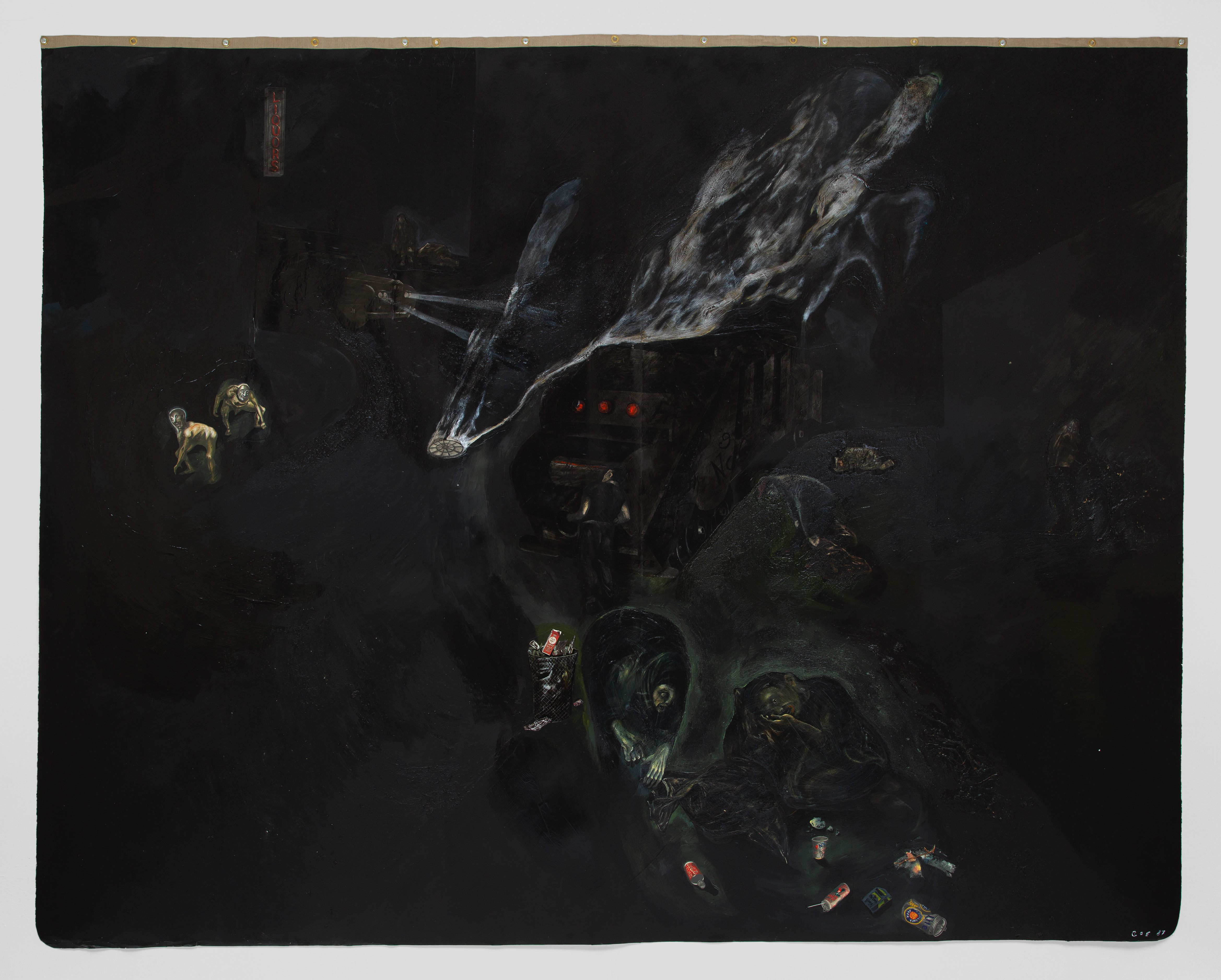 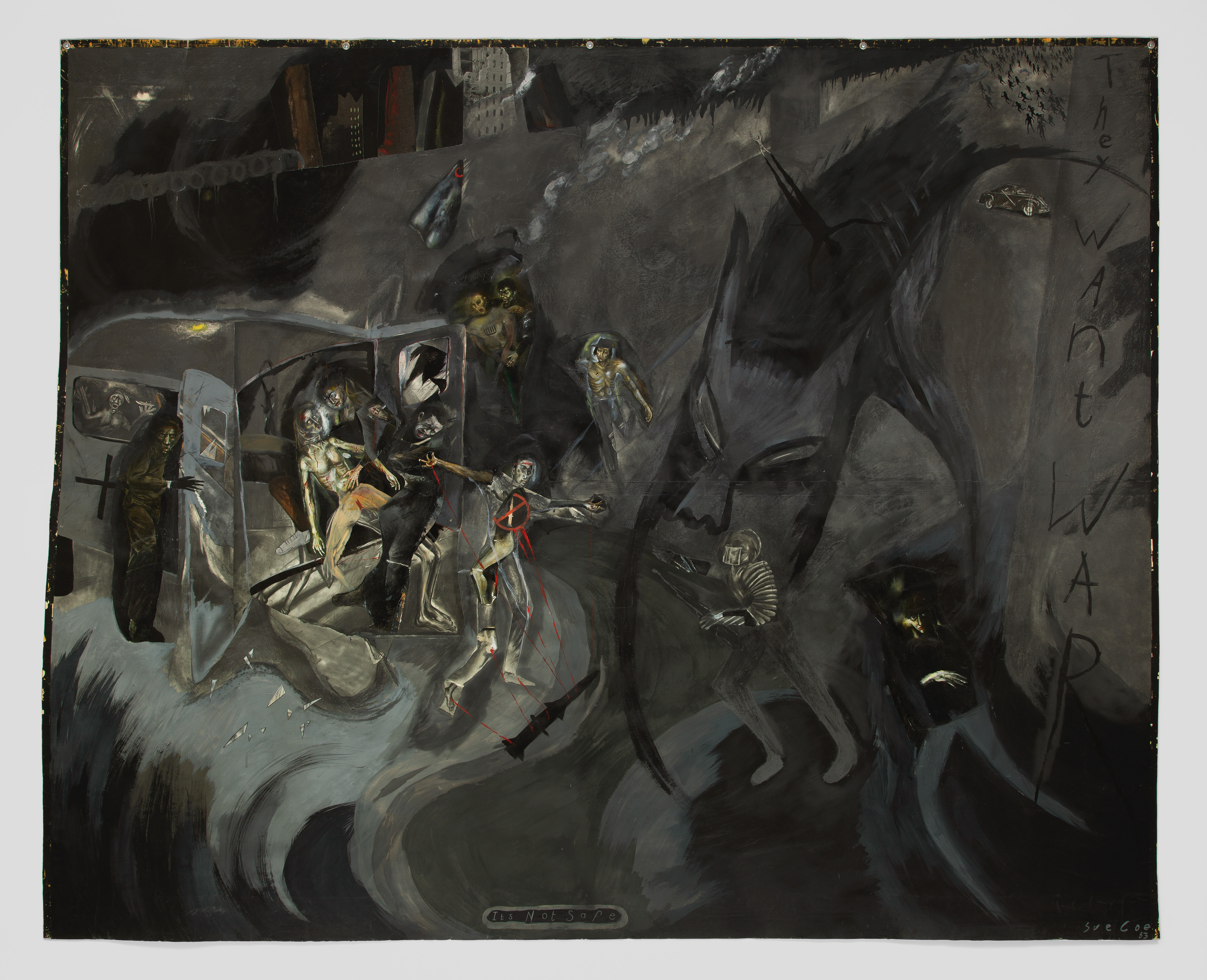 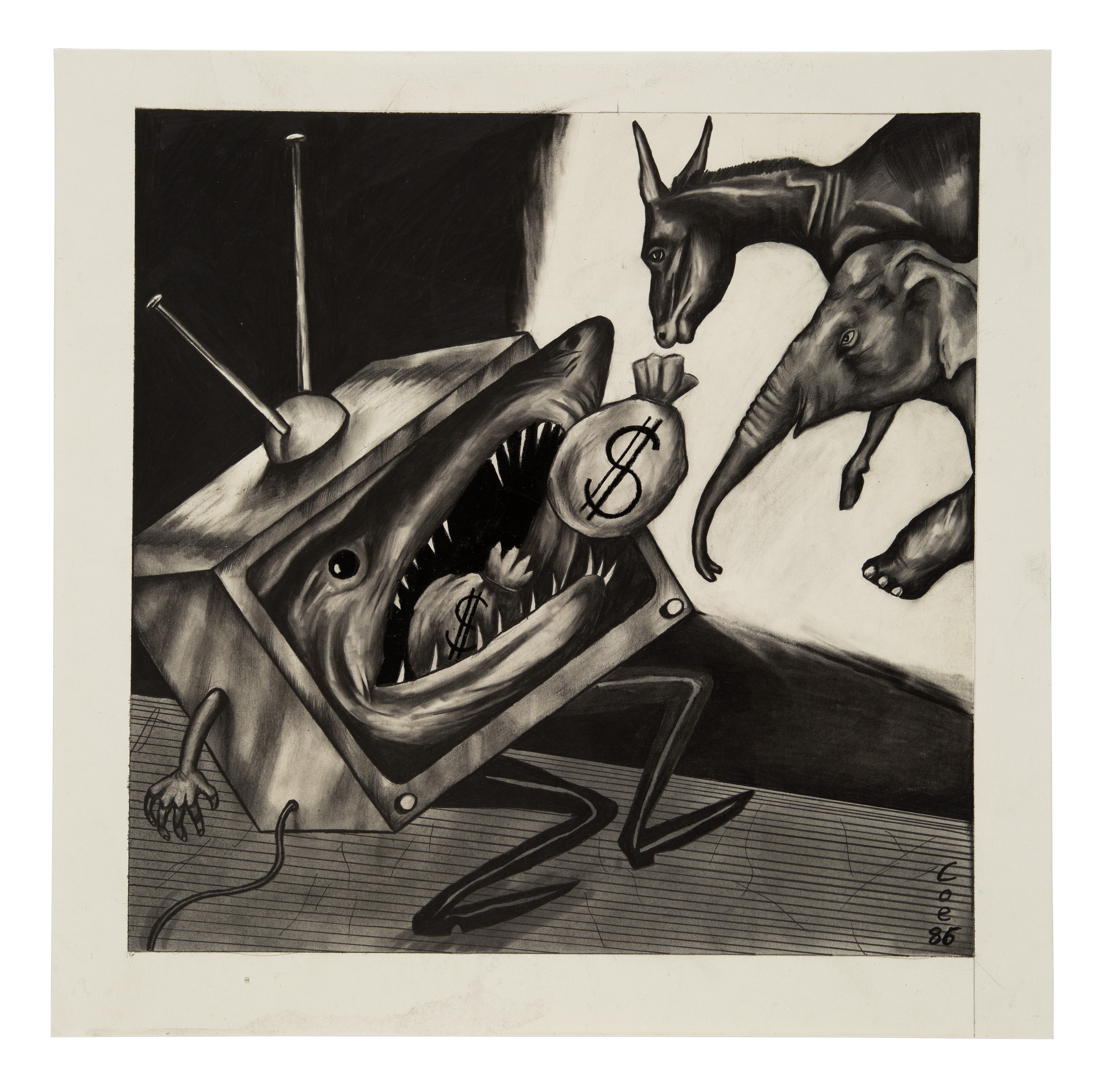 It is said that the youth are the ones with fire burning inside them. They are the ones inflamed and enraged at the establishment, with the energy to get out there and stoke change before they extinguish to paths of lesser resistance, surrender to a more “sociable” internal mechanics. And yet there is Sue Coe, in her 70s now, a counterpoint to the above, an activist-artist with the fire of youthful dissent still charged and aflame. She makes art and screams at the world at the top of her lungs through it. Her media is not palatable, it is not friendly. It is loose-lipped and finger-pointing, shameless and incendiary. Riveting and hyper-detailed, Coe’s body of work is artistically exploratory with the deft tact of someone who knows the rules but is (and has always been) practiced in breaking them.

Sue Coe was born in the early 50s in a market town in England. Her family’s home backed up to a slaughterhouse, a sensory context that instilled in her an immediately Orwellian subjectivity. After studying graphic design and then art in university in the UK, she moved to New York City in the early 1970s. Much of Coe’s work currently on view at George Adams Gallery in NYC is born of these iconic, fundamental, gritty, memorable, creatively charged days.

Sue Coe’s exhibition “Political Television” exhibits a selection of her work from as recent as this year and dating back to the 1980s, when she was making illustrations for mass media, commercial publications, as well as political commentary works for comic anthologies. The paintings, drawings, and collages on view are a collection of wonderfully indecent depictions of the casualties of capitalist avarice. In the monumentally sized 86th Street and Third Avenue (1987), black-on-black mixed media, globs of paint, and collaged cut-outs paint a gauzy, smokey scene of New York City at its truest and most unforgiving: crumpled denizens of the street, steam-hissing grates, an illuminated “Liquors” marquee, and night-crawling sanitary workers alongside (depicted in the canvas’s only few pops of color) cans representative of the trash of addiction: Miller Lite and Coca-Cola.

Similarly derisive themes echo throughout all of Coe’s works. In Monetarism (1987), another monochromatic drawing – also with a lurid pop of color, this time in the form of a red, two-circle target around hungry-, cold-looking people in despair – a golden-dollar-headed cartoon of a “suit” scornfully trots forward with a toy Zeppelin in hand. Meanwhile, a combat-ready shark wearing a military helmet rages open-mouthed onto the scene, grasping for the target’s perimeters with taloned fingers, and seemingly bleats the speech-bubble-like text: “MONETARISM”. The barrels of four guns intrude onto the canvas toward the targeted subjects, ready for a salvo.

Zoomorphism and violence jointly abound throughout Coe’s work. This is likely, somehow, a reflection of her ongoing animal rights activism, and her tendency to acknowledge the reality of an entwined human-animal-ecological plight; it’s also, likely, a stylistic choice stemming from cartoon art, desegregating the caricatures of humans and of animals to humble the former.

Each and every one of her artworks is ripe for interpretation, ample with moments to discover and dissect. They are gestalt make-ups of micro-vignettes, where zooming-in packs as large a punch as that of the work as a whole. In The Second Millenium (1997), Coe depicts a meat grinder in the foreground, with all types of animals being thrown by Reapers into the feed tube like a macabre Noah’s Ark. It’s not just animals, though: look closely and there are carts of humans in line, some in concentration camp-striped uniforms. Another cart of anthropomorphized animals-in-suits looks on, some ravenous and some in despair, with a politician-esque donkey postured as their leader.

In Carousel of War (They Want War) (2000), a featherless nestling with a skewer through its cranium dances in front of what seems to be the setting of a political hearing: an upper panel of obscure figureheads in gas masks overlooks a floor of animalized, grotesque figures (a muscular bull in a suit and tie brandishes a “WTO” Zeppelin in one hand and a bag of money in the other; a minotaur-devil belches the spirits of infamous politicians). Below, on one side of the canvas, is a pure-red garden of gravestones with statistics as epitaphs: “6 million Jews murdered WWII”, reads one; and another dictates, “1.5 million middle passage deaths during transportation”. To the other side of the canvas, a mob of toothy, gun-holding rioters picket signs of Islam, Judaism, and Christianity.

What happens, Coe seems to ask, when those under the heels of the reigning class discover the force of unity, when their subjugation flares up to consciousness? What erupts when history collides into the present, when the tractions of desperation spark collective fire?

Coe’s large and mostly multimedia works, altogether raging, are only part of her exhibition at George Adams; in a secondary show-within-the-show, The Age of Authoritarianism is a series of 67 linocut prints (all produced in editions) that have been made between 2016 and 2022, spurred on by the beginning of the Trump tyranny. The questions posed by her earlier works are in part addressed through this series: representative of COVID-19 crises, institutionalized racism and antisemitism, healthcare and voting rights infringements, ecocide, fascism, and the attack on the Capitol, the holistic series produces a life-size rendering of the farce-tragedy that is our current epoch. One of the final prints in the series, Forced Birth (2022), was produced in a limited edition of 35, and its sales benefit Planned Parenthood.

The prolific exhibition was organized in collaboration with New York’s Galerie St. Etienne and will be on view at George Adams Gallery through December 17.

David Lynch | A Categorical Forecast, a Parting of the Cumulus and Cumulonimbus

Bang & Olufsen | Collaboration with 12on12 and Ferrari Sheppard

William Eggleston | 'The Outlands' On View at David Zwirner

An Atmosphere of Evolution | Weathering the Notion of Touch and Tactility with New Hardback, 'Sense', by Artist Ann Hamilton

Avery Wheless’ Debut Solo Exhibition “So does everybody else”